We thank IACA for their contributions to the 2019 Currency Conference program, described below.

For a list of the IACA Excellence in Currency Awards winners, you can find it here. 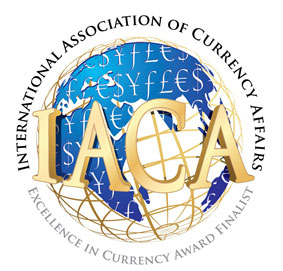 In 2018, the International Association of Currency Affairs (IACA), initiated a very successful opportunity for face-to-face discussion among its central bank representatives. They exchanged views on a number of issues ranging from ways to improve and add value for IACA members, to potential topics for future consideration.

IACA is delighted to announce that the next IACA Member Discussions will take place at the Currency Conference 2019 in Dubai, on Sunday April 7th, in the Grand Hyatt Dubai Hotel. The focus for both discussions will be Clean Note Policies. A first discussion open only to IACA central bank representatives will take place from 15:00 to 16:00. At 16:00, the meeting will be opened to all IACA delegates to the Conference.

Please consult the IACA website in 2019 for additional details. IACA looks forward to welcoming all IACA delegates will be in Dubai.

The finalists for the 14th round of IACA Excellence in Currency Awards have been announced. Voting by International Association of Currency Affairs delegates will be open through the IACA website from February 4–22, 2019. There were over 55 nominations received in the various categories. The finalists were chosen by a panel of seven industry experts including four former central bankers (see below).

The Award Finalists will be recognized Monday, April 8, during Opening Session of the Conference.

The Award winners will be announced on Wednesday night, April 10, at the Gala Dinner.